ACTNews, JERUSALEM – A day after the closing of entrances to Al-Aqsa Compound, the gates were finally reopened on Wednesday (3/13) morning, as reported by SAFA Palestinian News Agency. SAFA correspondents stated that Israeli police opened the gates at dawn to let the worshippers pray Fajr inside.

Palestinian groups stated that, as reported by Al Jazeera, the escalating tensions in Al-Aqsa Mosque is a continuation of Israeli arbitrary policies. A day before, on Tuesday (3/12), Israeli police closed all the gates to Al-Aqsa Compound in response to the fire that broke at one of the police stations near the compound. Palestinian witnesses, however, said the fire was caused by children who were playing with fireworks.

The closing of the gates near Al-Aqsa forced thousands of Palestinian worshippers to pray outside the compound and on the roads. They called the azan and prayed in congregations outside the gates.

The closure of the sacred compound was also condemned by Jordan. Jordanian Minister of Islamic Affairs and Holy Sites Abdul Nasser Abu Basal, called the ban of Muslim worshippers from entering the sacred compound as "a flagrant assault on all religious values, rights and freedom," and "an attack on all Muslims that touches the entire Islamic nation." 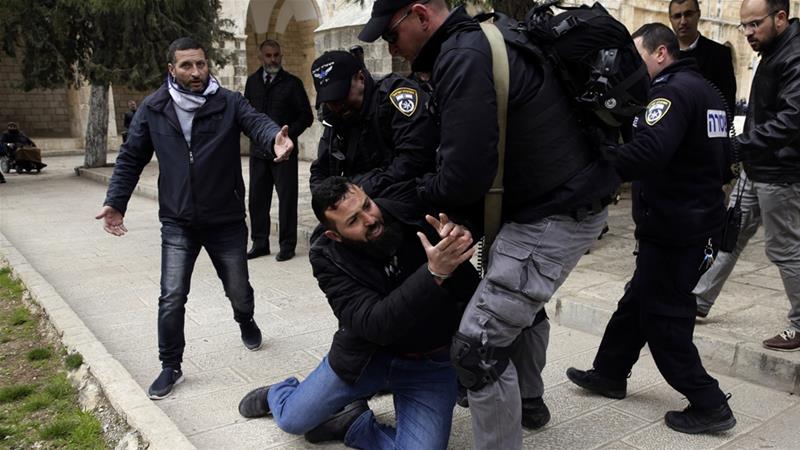 The closing of Al-Aqsa Compound happened repeatedly. Israel also banned several Palestinian figures from entering Al-Aqsa. As reported by Middle East Monitor, Israel issued 133 orders banning people of Jerusalem from entering Al-Aqsa after the opening of Al-Rahma gate. Additionally, there were 127 Israeli occupation attacks on Al-Aqsa and the Ibrahimi Mosques in February.

Al-Aqsa Compound is located in East Jerusalem, a part of the city that has been occupied by Israeli military since 1967. According to the status quo enacted between Israel and Jordan, the sacred compound is administered by Jordan’s waqf authority. []